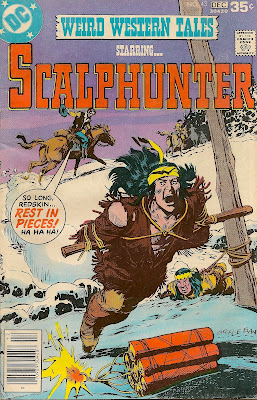 We start off with a three page recap that brings us to the point where Scalphunter and Sixteen Hands are bound hand and foot as the bank robbers decide what to do with them. Pete, the leader, gets the idea to use the dynamite they had been saving for a big job.

The robbers set the dynamite a short ways from the captives, put an incredibly long fuse on it, light it and ride off chortling. Alone, Sixteen Hands confesses of his plan to kill Ke-Woh-No-Tay. Ke-Woh tells him to shut his yapper and then rolls upside down to dislodge a knife in his boot. Holding the knife he tells Sixteen Hands to cut his own bonds. Sixteen Hands does this, grabs the knife from Ke-Woh, cuts loose his feet and then throws himself onto the dynamite to save Ke-Woh-No-Tay.

The dynamite goes off and then Ke-Woh-No-Tay has to wriggle across the snow, pick up the knife in his teeth and cut himself loose. After all of that, Sixteen Hands is still not dead. He still has time to wish Ke-Woh-No-Tay luck on his Death Stalk and gives him his own feather, making him a warrior.

Off in the distance, the bank robbers hear the explosion and celebrate. Pete tells everyone to break up and head back to their old jobs. They can lay low for awhile since nobody knows it was them that robbed the bank. However, Ke-Woh-No-Tay overhears everything since he is high above them in the trees.

Several days go by and Pete and Bart are working in the barn. Suddenly they smell smoke. Pete runs out and finds some rags on fire on the ground and a huge white man raised by Kiowas leaping from the barn roof. He puts up a gallant effort, but Ke-Woh-No-Tay holds him down and stabs him repeatedly. Bart tries to intervene, but the Kiowa brave reacts instinctively and scalps both men. 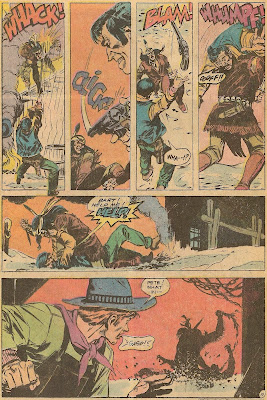 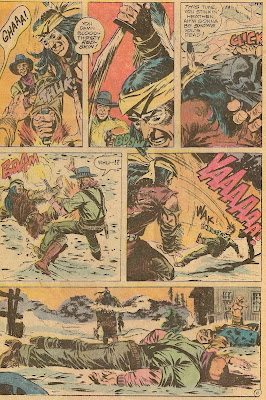 A few days later, Mike and Red are hanging out in the blacksmith shop wondering why they haven't heard from Pete. They decide to mount up and mosey on over and see what's up. On the way over, Mike's horse falls into a huge covered pit and Ke-Woh-No-Tay leaps from an overhanging tree. As Read panics and turns tail, we hear the agonizing screams of Mike.

Red pulls up in front of the sheriff's office and runs in pleading his brother, Brett, for help. Red tells MOST of the story and gets Brett to help him find the Indian. Brett and Red use a shortcut to lie in wait for Ke-Woh-No-Tay and Brett gets a shot off, knocking the Indian off his horse and into the tall grass and cattails. When they rush down to inspect the body, Ke-Woh-No-Tay is gone. The men decide to split up and in a short time Red is ambushed by a bent sapling.

On his knees begging for mercy, Red watches as Ke-Woh-No-Tay slowly walks forward, grabs Red by the hair on his head and then buries his tomahawk into the man's skull. As Ke-Woh-No-Tay is taking Red's scalp, Brett shows up and his horse kicks Ke-Woh-No-Tay as he rushes Brett.

Brett, slips a rope around the Indian's ankles,, drags him to a nearby tree and hangs him upside down as he takes careful aim with his rifle...

A seventeen page story with three pages of recap doesn't leave much room, but this one is packed with action. True, the dynamite was terribly slow and Sixteen Hands appeared to be able to live through almost anything, but the out and out savagery depicted in the scalpings really helped the book live up to its name. One thing bothered me, it seems like two weeks has gone by, so I'm wondering if Scalphunter is a dead man when he gets back to the tribe. (I'm not really wondering, I've already read all of these books. Just trying to build suspense.)

I'm liking the ongoing storyline and it's interesting that Ke-Woh-No-Tay's task is done, but he isn't out of the woods yet.

Next Issue: The wagon train of death, a killer cougar and...APACHE RAID!
Posted by Dwayne "the canoe guy" at 6:00 AM

Best to chalk up the 1865 in # 42 as a mistake and place them all back in 1862 as the forthcoming stories tend to evolve from that date.