The Kents, victims of the DCU

The Kents (1997-98, John Ostrander - writer, Tim Truman & Tom Mandrake - art) was a twelve issue miniseries that told the story of the Kent family in Kansas during the 1800's. The setup is that Jonathon Kent finds a trunk of letters & journals buried in his backyard in Smallville, Kansas. During the twelve issues he compiles the writings and sends copies of them to Clark, in Metropolis. The story starts in 1854 and ends up 40 years later in 1894.

During that time we are introduced to the bloody history of slavery in Kansas, the fight to create Kansas as either a free or a slave state, the Civil War, the relocation of various Indian tribes to Oklahoma, and the rise of the outlaws in Missouri. This is quite an undertaking, following the Kent family through Kansas, Nebraska, Missouri, Oklahoma territory, and Texas. Does it work?

On one level, yes, but it does fail on another. In the introduction, Ostrander writes that he was wanting to write an epic western but he had to pitch it to DC in such a way that they would buy it. To do that he had to tie it into the DC Universe and that is where the story suffers. As a story about family writings found after many decades, this is an engrossing story. The family is woven into actual historical events and Ostrander has a good understanding of the political & social ramifications of historical events. I never thought about Clark, the recipient of the letters, as being Superman. This kept the story grounded in reality.

In issue #4 the story starts falling apart, well, not FALLING apart, but the first chink is knocked out of the mortar. Nathanial Kent is wounded & his half-breed friend takes care of him & wraps him in an Indian healing blanket. Yup, a blanket with a big snake on it, I mean, a big S on it. 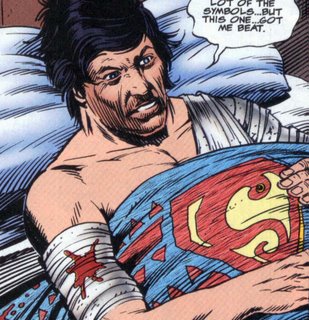 But then in issue #8, during 1864 Bill Hickok is relating a story that involves Jonah Hex. the problem? 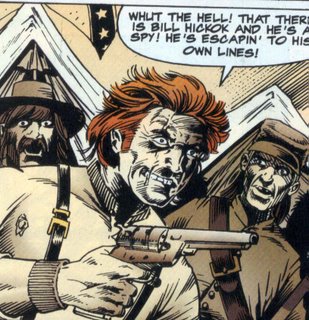 Jonah is sporting a huge scar. We know that Jonah surrendered to Union forces in1863 so why would have shown up back on the side of the Confederacy? Well, (you say) maybe the story took place before he surrendered? Nope, we saw when he surrendered and he wasn't scarred then. We also know that Jonah was scarred in1866. Sure, Tim Truman may not be expected to research how a character looked at a particular time in history (cough), but I would have expected the Editor, Peter Tomasi, to at least check this out. This is the 'dumping ground' that I warned about. Lazy writers/artists/editors make dumb mistakes when trying to tie things in to the DCU without doing their homework.

Later on, the Kents run into Scalphunter as well as Matt Savage. This jars me back into the 'comic book' world and pretty much ruins the 'willing suspension of disbelief' that makes the story work. Then they drive the last nail into the coffin on the last page when we see Clark Kent, who we know is Superman, pondering that the Kents have finally 'reached the stars'.

It's sad that DC wouldn't have considered doing this mini-series without trying to cram the DC Universe into it (or vice versa). It's a good historical epic, just like Ostrander wanted, but cutesy meet-ups and tie-ins really undermine the effort. Could this have sold without the Kent/Superman hook? Probably not, and I think the comics industry is a little worse off because of that fact.
Posted by Dwayne "the canoe guy" at 8:58 PM

But I'm sure DC meant for it to have been time-travelin' Hex, back in the past to score some powerful artifact which...

Yeah, and I though Marvel's continuity sucks.