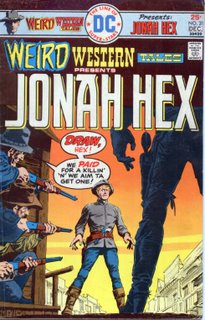 This issue opens in June, 1875 (same year as last issue in Richmond, VA) with Jonah hex riding into Wolverine, Wyoming. As he rides past a large outdoor arena being built, he wonders why he friend Dave Prentice sent a telegram requesting Jonah come to Wolverine. Jonah & Dave fought together at Antietam and Dave is one of the fastest draws that Jonah as ever seen.
Jonah arrives in town and wonders who he should ask to locate Dave. He is riding past the sheriff’s office as six men stand outside, calling the sheriff out. Jonah notes that 6 vs 1 doesn't seem fair but he's not gonna get involved. Just then the sheriff comes out & it's Dave. Dave strolls slowly out and asks the men which one wants to be the first to get his head blown off. They laugh, pointing out that it's six to one. Jonah corrects them, saying it's six to two (and adds ",Skunk" for an extra measure).

The next scene is nicely written as Jonah & Dave discuss the telegram, the trouble Dave is in, how Dave will be with Jonah just as soon as he kills these men, Jonah taking note that one of them MIGHT get off a lucky shot, Dave letting Jonah taking first pick of which ones he wants to kill, and Jonah choosing "Big-Mouth over thar, an' Paul Bunyan over thar, an thet tall, ugly one over thar". The six men get pretty disgusted asking if they're gonna fight or stand there and talk everybody to death! Dave & Jonah draw, six shots are fired and the six men fall dead in the street. 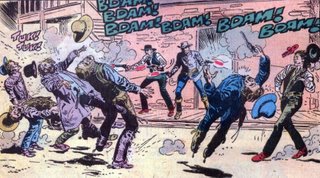 Dave compliments Jonah on his shooting and says that he wouldn't want to face-off against Jonah anytime soon. Jonah echoes the same sentiment regarding Dave.

As Jonah & Dave go to the livery to get Dave's horse, Dave explains that those men were part of Butch McCandless's gang. They've been trying to get revenge since Dave hung a couple of his boys for bank robbery. As they ride out to Dave's place to meet his wife & son, they catch up on the past 10 years. Jonah makes mention of the ongoing cough that Dave has to which Dave responds it's from smoking and not to worry.

Jonah asks why Dave sent for him & Dave says that he just wanted to see an old friend. As they pass the arena, Jonah asks why it's being built since it looks big enough to hold the whole town. Dave explains it's for a rodeo. When they get to Dave's house, he introduces his wife, Sandy, and son, Tommy. When Dave introduces Jonah, Sandy suddenly starts crying and runs inside.

Later, during dinner, Sandy apologizes for her behavior. Just then a Molotov cocktail crashes through the window, setting the house afire. Dave tells Tommy & Sandy to put out the flames while he and Jonah sneak down through a tunnel Dave dug in case of Indian attack.

Outside, two men have a string of bottles of kerosene, ready to throw at the house. As they ready to throw one on the roof, a bullet shatters the bottle and then all the other bottles, except two are shot as well. We hear Dave compliment Jonah on his shooting and says that he'll shoot the last two bottles. The two fire-bombers draw their pistols and are gunned down. Jonah notes that Dave missed the bottles. Dave spots two more men over by a hay bale. Jonah lights up the bottles and tosses over towards the hay. Dave shoots the bottles, setting the hay bale on fire and Jonah guns down the men as they flee for safety.

Dave and Jonah return to the house where the fire has been put out. Jonah helps Sandy clears the table and Sandy tells Jonah that Dave has tuberculosis and won't last the year. Dave is worried how She and Tommy will make due since being a small-town sheriff, Dave doesn’t earn much money. She tells Jonah that Dave has cooked up a wild scheme that will make lots of money by.... Dave loudly interrupts her and asks Jonah if he would like to go on nightly patrol with him.

As they ride into town, Dave asks Jonah what Sandy told him. Jonah said it was about some plan to make money and asks if Dave is planning on stealing anything. He simply replies, "Nope".

In town they encounter a local drunk, who takes note of Jonah's confederate coat and explains to Jonah what trash the Rebs were. Jonah sates that the war has been over a long time, but the drunk keeps railing. Finally the man charges Jonah who simply sidesteps and slaps him on the back of the head as he falls past into a horse trough. Dave fishes the drunk out and takes him to Jail.

Jonah is waiting for Dave to return and a blind man in a Union uniform comes up and asks Jonah if he has his ticket to the gunfight yet, only $5. The blind man explains that it's a fight to the death between Sheriff Prentice and Jonah Hex, the two fastest guns in the west. It won't be fixed, neither, because Prentice guarantees that unless one of them dies, all the money will be refunded. The blind man, tired of trying to sell the ticket, finally wanders off. Dave returns and Jonah mentions how insulted he is that he wasn’t properly invited to the gunfight. Dave starts to explain and Jonah is suddenly knocked unconscious from behind. Dave tells Jonah's attacker to help get Jonah over to the arena.

Later, Jonah staggers to his feet in the arena. It is crowded with the entire town and lit by kerosene lanterns and the first hint of sunrise is on the horizon. Dave is standing in the arena, facing Jonah. 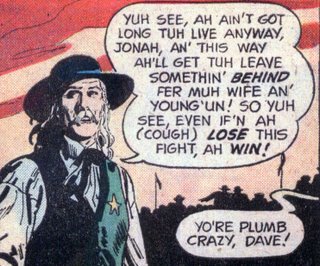 He apologizes for having to do this, but he's sold two thousand tickets at $5 each and he knew Jonah would never agree to do this. This is his only way of providing for his family and even if he loses the fight, he still wins. Jonah picks up his hat and turns to walk away, The crowd gets restless and starts booing. Dave warns Jonah that he'll shoot him in the back if he has to. Dave draws and we hear a shot ring out.

Jonah spins around and Dave is dead. Sandy is standing to the side with a smoking rifle. She says that she couldn't let him become a murderer for her sake and then she falls to the ground, cradling her dead husband in her arms. Jonah leaves the arena and the banker approaches Jonah with the ticket receipts. Jonah says that he'll take them out to Dave's place as he leaves town. Just then Butch McCandless arrives and forces Jonah to drop his gun belt. Butch is a little peeved about all the killing of his gang & will take the money to console himself. Jonah, with his guns on the ground and Butch holding two pistols on him, tells Butch that if he lets Jonah take the money to Prentice's family, Jonah will let Butch leave alive. Butch breaks out laughing until a knife is hurled into his chest. Jonah, standing over Butch's corpse, take the strongbox from the banker.

Out at Dave's place, Jonah gives the money to Sandy and Tommy. Tommy, crying, asks if Jonah outdrew his dad. Jonah states that no man alive coulda outdrawn his paw, he was the fastest.

This was a very enjoyable story. The interaction between Dave and Jonah sounded like two friends that hadn't seen each other in a long while, short questions, short answers, that fit these two men to a T. The little jabs and comments during the gunfights were priceless as well. Other nice bits included Jonah helping with the dishes and the blind ticket salesman. Finally, the irony of Sandy shooting her own husband to save Jonah was well done also. The death of Butch was the icing on the cake. And since Jonah DID have to face the possible wrath of the entire town, this issue did include Jonah vs Wolverine ... Wyoming.

Next Week: A kidnapping, Jonah fights a b'ar, and (I kid you not) Jonah Hex vs Bigfoot. No, really, Bigfoot.
Posted by Dwayne "the canoe guy" at 5:17 PM

Is it just me, or does that dude with the knife in 'em kinda looks like Burt Reynolds.