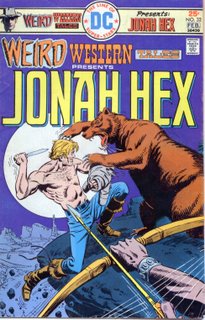 Weird Western Tales #32 Jan-Feb 1976
"Bigfoot's War"
Michael Fleisher, story - Jose Luis Garcia Lopez, art
The story opens in an undisclosed place & time. On a ranch a Mr. Haynes is seeing his grown daughter, Debbie, off to town for a shopping trip. She is going to be accompanied by two of the ranch hands when five Indians ride up and slaughter the ranch hands and abduct Debbie. When Haynes tries to stop them, he is clubbed unconscious. 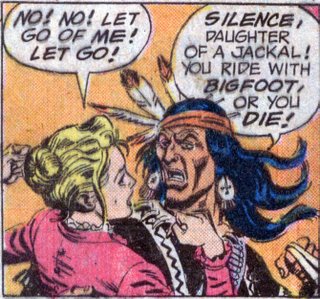 The next day Jonah Hex rides up to the ranch. A young ranch hand, sitting and whittling, tells Jonah to keep riding, Mr. Haynes doesn't cotton to saddle tramps. Jonah dismounts, kicks the whittling from the boy's hands and tells him to notify Haynes that Jonah Hex has arrived, or else they'll spend the next year and a half putting him back together with baling wire & glue.

Haynes comes out and escorts Jonah inside. Haynes explains that the Paiutes have kidnapped his daughter & he is willing to pay $10,000 to get her back. Haynes shows Jonah a note left by "Crazy" Joe Bigfoot stating that unless they receive $100,000 by the day after tomorrow, they will kill Debbie. Jonah wonders why the Paiutes are picking on Haynes & he explains that he has had some land deals with them and some of the tribe are not happy with the details of the transaction. Haynes also offers Jonah $5,000 for the capture of Bigfoot alive, so Haynes can see that Bigfoot gets the kind of death he deserves.

Jonah tracks them through the day and finds a place where it appears that two riders dismounted. Jonah surmises that it could be either to give the ponies a rest or to set up an ambush. He was right on the second count for just then two of the Indians jump him from the rocks above. They demand the ransom money and when Jonah plays dumb, they say they will make an example of him to Haynes, as a warning. They club Jonah over the head, knocking him out (This is the fourth issue in a row where Jonah has been hit in the head. Somebody must be getting him confused with Hal Jordan).

Jonah wakes up hours later in a cave, tied hand and foot, and covered with honey. Slowly a grizzly bear walks into the cave and slaps Jonah. Jonah rolls with the attack and while the bear is licking Jonah blood from it's paws, Jonah grabs the knife he keeps in the back of his shirt collar. Holding the knife with his teeth, he cuts his hands free and then cuts the ropes on his feet.

Jonah pulls his shirt off and wraps it around his left forearm, as he once heard that a trapper did to fight a bear. Jonah rushes the bear, shoving his left arm into the bear's mouth and repeatedly stabbing the bear with the knife. Finally the bear dies and Jonah staggers out of the cave, scarred & bloody.

It is night and Bigfoot and his men are camped out. Bigfoot is offering Debbie food, but she refuses, saying that her father will make Bigfoot pay for this by killing him. Bigfoot gloats that his men have already taken care of her rescuer and that her father will pay the ransom. Debbie starts to insult Bigfoot, but he silences her with the back of his hand. 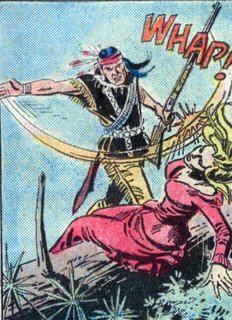 Bigfoot tells Ke-Noh-Tay, one of his men, to take Debbie to the river to have her fetch water.

Jonah sneaks up behind the sentry watching over the camp & buries his knife into the Indian. He then puts on the Indian's Union uniform and walks into camp just as Debbie and her guard return. When Jonah gets into camp, Bigfoot realizes the masquerade, but it's too late. Jonah gets the draw on all the Indians ad is holding them at gunpoint. Debbie asks why Jonah isn't shooting and killing them. He explains that 'masacreeing' people in cold blood isn't in his line of work.

Debbie starts shouting that she has been held prisoner and had to haul water. Jonah notes that she doesn't appear to be any worse for the wear but Debbie grabs a knife and charges Bigfoot. Bigfoot grabs her wrist, twisting the knife from her hands and then holds it to her throat. He forces Jonah to drop his weapons and the last panel has Bigfoot holding his knife at Jonah's throat saying that Jonah's scalp will be on a coupstick. CONTINUED!!!

Statistics for the Issue
Men killed by Jonah - None, even though Jonah stabs the sentry, he appears next issue, so he wasn't killed.
Running Total - 90
Jonah's Injuries - Knocked out with a tomahawk
Timeline - Non determined.
A good issue for the first of a two-parter. You have some common elements with the spoiled kidnap victim, the semi-shady father's 'land deal', and the hostage screwing up the rescue. Lopez's artwork is not as gritty as DeZungia, Panaligan, or Molterini, but he has such a cinematic feel and his people are so realistic, it's almost like watching a movie. I'm always happy to see his work in any book.

Next Week - A tomahawk fight, a rescue, and the threat of flesh-eating ants!!
Posted by Dwayne "the canoe guy" at 5:35 PM

"Silence, daughter of a jackal! You ride with Bigfoot, or you die!"

Awesome! Another phrase from HEX to try out on the Missus. I'm so gonna say this next time we drive to Wal-Mart.

It would be very effective at the monster truck rallys. If you don't like Bigfoot, you could substitute GRAVEDIGGER!!!!

Boy, Debbie sounds like a real pain in the butt. I've always loved the ridiculous amounts of money that they use in these, $5,000 for rescue is a HUGE amount of money when inflation is factored in. This is a time when men were working for a dollar a day, and glad to get it.

Yup, $5k in 1875 is over $81k today. Even if we take into account that $5k was a lot in 1976, the same amount of money back in 1875 would be over a thousand bucks. The stories written by Albano were more realistic in that the bounties were $100 or $200. I think that the current series has more realistic bounties as well.

My rule is, if it is a Fleisher story, knock the last zero of any bounty/fee.