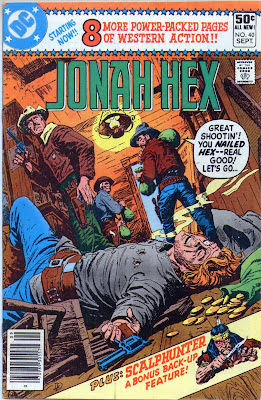 Jonah Hex is riding a slow horse across a dry cracked landscape; a dead steer nearby covered with vultures. Jonah comments that it has been ten solid weeks without rain. He tops a rise to see a bunch of Paiutes chasing a wagon driven by Calvin "Cloudburst" Timmons. Jonah dismounts, grabbing his rifle, and opens up on the Indians. He kills three of the six and the rest turn tail and run.

Jonah rides down to meet Timmons. Timmons explains that he had been hired by the Paiutes to create rain and when it didn't materialize, the Paiutes wanted his scalp. Timmons ended up killing a couple of them and asks if Jonah would escort him to the next town. Jonah agrees and they continue on their trip.

Hex and Timmons arrive in the town several hours later and Timmons gets right to business of creating rain in front of the huge crowd. Jonah notices some hardcases on the edge of the crowd and recognizes them as Billy McAllister and his gang. They mosey off to town and Jonah follows.

In town, McAllister and his gang head for the express office. They know they are being followed and McAllister leaves one man outside to watch the horses. The remaining three walk in and one goes out a back door in order to ambush Jonah when he shows up. Hex bursts in and shoots one gang member in the face. The one member comes in the back door and shoots Jonah three times and then McAllister and the shooter head back to their hideout.

Once back at the hideout they tell their boss that they managed to kill Jonah Hex in the bargain. Calvin Timmons is very happy to hear that and tells his gang to get some sleep since they will need to head out early to avoid getting caught by the townspeople once they realize the rain won't come.

Meanwhile, Jonah Hex is in the doctor's office and is getting bandaged up. The doc says that Jonah needs to take it easy since he just had three .38 slugs dug out of his chest. Jonah says that he plans on visiting the guys that put the slugs in him. The doc is aghast that Jonah won't take his advice.

Much later that night in the hideout of Timmons and his gang, Timmons gets up in the dark and mentally quoting "The Walrus and the Carpenter" shoots his entire gang, grabs the money and heads out. However, Jonah Hex is standing in the doorway. Timmons grabs a bag of cash and slams it into Jonah wounded chest.

Jonah staggers and then Timmons grabs a chair and breaks it over Jonah's head, knocking him out. 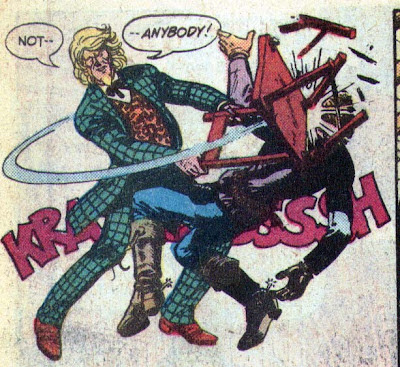 Timmons hears a noise outside and when he steps out he is greeted by a huge cloudburst.

Overjoyed, Timmons grabs his money and counting on his tracks being washed away, he jumps into his wagon and takes off. Eventually, Timmons comes to a ferry and the ferry operator explains that the wagon won't fit on the ferry. Timmons says that he'll come back later for the wagon and as he is gathering up money bags the ferry operator notices the bags. Timmons pulls his pistol and kills the operator and tries to navigate the swollen raging river by himself, but of course the ferry overturns.

Timmons is thrown into the river and all of the bank bags go to the bottom of the river. Timmons barely manages to get to shore but he is greeted by the three Paiutes that survived Jonah's attack earlier. They grab Timmons and tie him to a tree.

Meanwhile, Jonah is coming to back at the hideout. He stumbles out into the storm and attempts to hunt the rainmaker down. Dawn finally breaks and Jonah is unable to find any evidence of Timmon. Jonah continues his search and finally realizes that he will never find Timmons and gives up.

Statistics for this Issue
Men killed by Jonah - 4
Running Total - 283
Jonah's Injuries - Shot three times in the chest, hit with a bag of coins, smashed in the head with a chair.
Timeline - This one takes place after 1872, when "The Walrus and the Carpenter" was published.

I enjoyed this issue but I am always partial to a slick talking con artist like Timmons. I also liked the fact that he double crossed his entire gang, took Jonah out by taking advantage of a previous wound (along with a well placed chair), and that the rain eventually became his undoing.

On the downside, has there ever been a ferry in a Jonah Hex book that didn't end up sinking? At least it didn't go over a waterfall.

On the plus side there was also the first part of a Scalphunter story (to be reviewed much later) and since I'm so late with this review, here is a sneak peek at that story. Yup, it's one for the ladies! 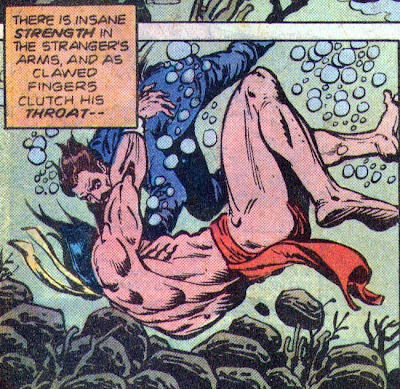 Next Issue: A coward, a floozy, and a hanging judge. Guess who wins this one?
Posted by Dwayne "the canoe guy" at 12:13 PM

Ah, one for the ladies, INDEED!

The Hex story sounds VERY good, especially because I am a fan of Alice, but I do have a minor quibble. If it hasn't rained in 10 weeks, shouldn't the river with the ferry, have been down to a trickle? That must have been one HECK of a cloudburst, but I suppose that it is possible.

Ya know, there can be water in a river even though there is a drought. A few years ago there was no measureable rainfall for 18 months and we still had water in the rivers. Granted, you could walk across the river, but there was still water.

I just assumed that the water coming down the river was coming from the nearby mountains and caused the flash flood.

Yup, it was one of the better endings. I used to dislike the endings that had Jonah just riding off (such as the Samurai issue and next issue) but I'm starting to really enjoy those. This one was good because it looked SOOOOOOOOO 50's EC.

Spiegel has to be the worst Hex "artist" ever.👎🏼 Thankfully he only got to destroy 3 issues w/his "talents"