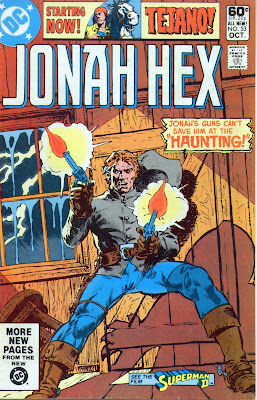 The bad guys have kidnapped Jonah's neighbor kid, Petey, lured Jonah into a cabin and just blown it all to hell. They ride off with Petey, thinking that they will be able to collect a ransom from Mrs. Hex and as they do, Jonah picks himself up off the ground. How did he survive?

The flashback shows Jonah kicking down the door and seeing food cooking on the stove. He picks up the skillet and underneath it sees wrappers from a box of "Ol' Rattler" dynamite!! Knowing that there is a trap, he hurls himself out the back window into the tall grass just as the cabin explodes. Now he is on the trail of the kidnappers.

The kidnappers are riding along, talking about what they will do with the ransom loot when the one riding in the rear is suddenly hoisted up into the trees by a noose around his neck. Jonah drops from the tree onto the dead crook's horse. When the lead kidnapper turns and sees Jonah, he pulls his pistol only to have Jonah shoot it from his hand! The crook says that he can't believe it to which Jonah replies, "Could I help it if when I fired you were holding that pistol in front of your heart?" (Translated from Hex-ese into English for easier typing).

Jonah takes Petey home and when thanked for rescuing the boy, Jonah says he had to, otherwise how could he get anything done on the farm? Jonah takes the kidnappers into town and then returns home after dark. Walking in, he lights a lantern and calls out for Mei Ling. The only answer is a note that she has left, indicating that she has taken Jason and left Jonah for good. Jonah upends some furniture in a rage and heads out to track Mei Ling down only to find a sudden downpour is wiping out her tracks, causing Jonah to rage against God in the middle of the deluge.

Meanwhile, Mei Ling has made here way over to Hiram & Ruth's farm, wanting to sit out the storm. Ruth introduces Emmy Lou and then Mei Ling explains that she is leaving Jonah. Mei Ling finally breaks down crying. She regains her composure long enough to grab her things and then head out despite the downpour.

Back at the Hex farm, Jonah decides to drown his sorrows by tossing back one after another. After some time passes the cabin door opens and El Papagayo walks in and tells Jonah that he would be more than happy to put Jonah out of his misery. Jonah outdraws the Mexican bandit, shooting the doorway and windows to pieces.

Behind him, Jonah hears Turnbull commenting to Solomon on how pathetic Jonah is in his drunken stupor. Jonah starts shouting his innocence to Turnbull and unloads his pistols again, destroying all the furniture. Jonah turns to face his father, holding out a bottle of whiskey. Woodson tells his son that he needs to learn to hold his liquor if he ever hopes to grow up like his paw.

Jonah starts screaming that he never wants to be like his father and rushes out into the rain where he is confronted with the Chameleon, brandishing a bloody pitchfork. 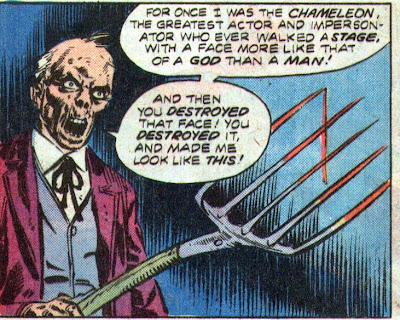 The Chameleon says that tonight Jonah will die but Jonah unloads once again, shooting the head completely off the scarecrow that Jonah mistook for the Chameleon. Jonah finally collapses in the rain, beaten down by his drunken hallucinations and his own sorrow.

The next day, Jonah is packing up his horse, ready to leave, when Emmy Lou rides up, asking where he is going. He states that he is returning to bounty hunting and get filthy stinking rich. Emmy begs to be taken along and Jonah says there is no chance of that happening. Emmy says that she will never forget him and as he rides off and leaves her, he thinks "Oh, yeah, you will!"

Statistics for this Issue
Men killed by Jonah - 2
Running Total - 331
Jonah's Injuries - Almost blown up!
Timeline - Same day as last issue and the day after. Spring of 1876.

This issue also had a backup, Tejano, a short lived series that I will chronicle at a latter date.

I really liked this issue, having a lot of tragedy and showing the amount of sorrow that a life like Hex's can put upon a man. The number of people that have tried to kill him and destroy him have not pushed him over the edge like losing the love of his life and only son. Makes me wonder if the level of pain would have been as deep if Mei Ling and Jason had been killed. I don't think so, because if they were dead, at least there would be some closure. With them both alive, every day that they don't return is another day that Jonah is being rejected by those he loves. It's also another day that he dare not hope that they return, because Jonah is slowly learning that hope brings nothing but more pain.

Jonah Hex is learning that his life is a tragedy. Pure and simple.

Next Issue: Is it still a drunken nightmare, or does Jonah really have to face El Papagayo and the Fort Charlotte Brigade?
Posted by Dwayne "the canoe guy" at 11:31 AM

There is no doubt about it. Jonah's life just sucks.

Nice follow up to issue #52. A brief story that manages to pack a lot of character content into it. That ol' Fleisher magic strikes again. It's Hex as vulnerable as we've seen him, though the turpentine liquor may have also influenced that.

Oh, and if they insist on putting in backup stories, at least let it be Scalphunter. The others I could do without. Notice I regard these books as the present tense; man, am I outta touch.