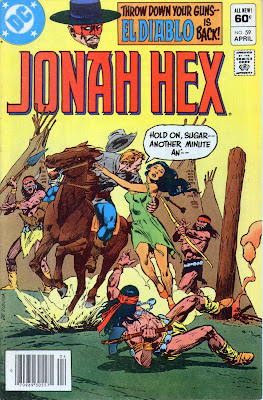 Mei Ling, her dress torn, is tied to a burning stake, surrounded by chanting Indian warriors and Jonah Hex comes riding over the horizon, guns blazing. His horse rears up and he cuts loose with a hail of bullets. Indians are dropping like flies as Jonah leaps from his horse and cuts his wife free from her bonds. Jonah tells Mei Ling to get on the horse as he kills several more Indians. As Jonah helps Mei Ling into the saddle an arrow suddenly slams into her back and with Jonah shouting for Mei Ling to hang not and not leave him, Mei Ling dies a horrible violent death in his arms.

Aaaaaand, of course, that is when Jonah Hex wakes up. sitting bolt upright in bed, screaming his head off. Other folks in the hotel are banging on his door, telling him to shut the hell up (and it may be the ONLY time anyone has gotten away with that move). Jonah gets up, washes up and gets dressed, taking assessment of his current situation. He hasn't been eating well, sleeping right and he has been getting drunk much too often and it may lead to his death at the hands of a quick sober gunslinger. Jonah then heads out, looking for a hot steak and instead finds... 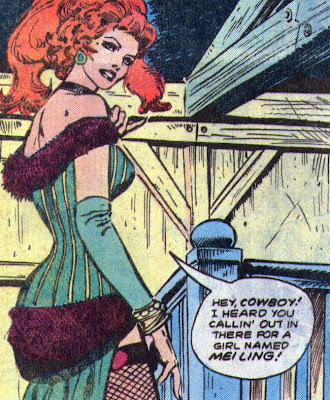 Jonah turns her down and then wakes up the desk clerk to find an all night eatery. The sleepy-headed clerk directs him to Clarkson's Cafe. Jonah heads out into the street and we see that there is someone watching him from the hotel.

Just then six men approach Jonah and call him out. Hex tells them that he has never met them and maybe they're making a mistake, after all there are a lot cowboys with sparkling blue eyes like his. The men go for their guns and Jonah, well, he does what Jonah Hex does best. 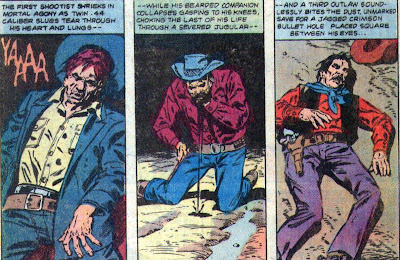 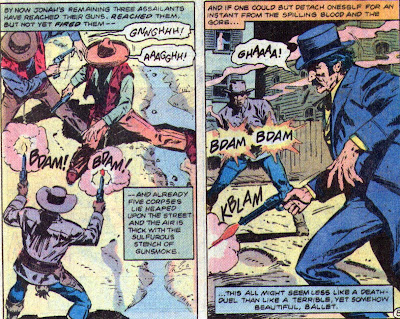 He kills them where they stand and then goes and gets a steak dinner.

Back in the hotel, Mr. McGrath is astonished that six of his best men have just been gunned down and is complaining to a Chinese man who is smelling a white lotus. The Chinese man says that McGrath has been well paid and that his services are no longer needed.

At the cafe, Jonah is still mulling over his situation with Mei Ling and tossing back one drink after another.

Several miles away, at the house of Mei Ling's brother, Mee Ling is standing outside looking at the stars. Her Sister-in-law, Mei Song, asks why she is out so late and Ling answers that maybe Jonah is looking at the same stars as she. When Song asks if Ling still loves Jonah, she answers..

Back at the cafe, the Chinese man stands before Jonah and introduces himself as Wu Gong Phat, a merchant from Nanking. He shows Jonah a white lotus and asks if Jonah has ever seen such loveliness. Jonah takes the flower and gives it a sniff. Suddenly the room is spinning and Jonah passes out. Then Wu Gong Phat and his wife attempt to rape Jonah since Phat is infertile....oh,wait, I got confused with Jonah Hex #35 vol 2. Silly me.

Wu calls in several of his men and they carry Jonah out to a waiting wagon while Wu pays off the owner of the cafe, saying that Hex has drunken himself into a stupor. Outside, they stuff Hex into a large basket, throw him on the wagon and take off. 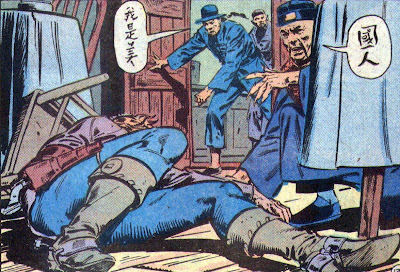 The next afternoon, Mei Ling and Jason are in the garden when her brother brings her a letter. Ling opens it, reads it and a wilted lotus falls out. Mei Ling panics and asks her brother to take care of Jason until she gets back, but she cannot say why she is leaving. 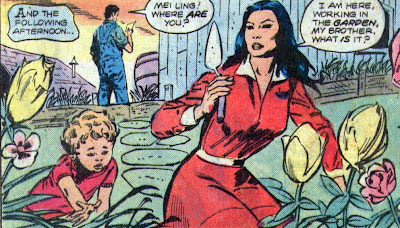 The wagon carrying Jonah travels across Nevada and into California until two weeks later they arrive in San Francisco in front of a large sailing ship.... 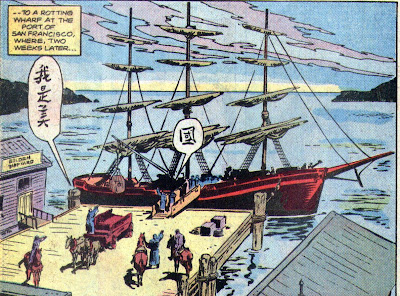 Statistics for this Issue
Men Killed by Jonah - 6 Running total -350
Jonah's Injuries- Drugged unconscious
Timeline - This story covers just over two weeks and is clearly part of the post-wedding arc. This will be mid-Spring 1876. Let's say the last two weeks of April.

A short 17 page story (El Diablo backup, yuch) that really got me excited. This looked to be the start of a long story arc and was actually moving the Mei Ling-Jonah Hex story forward at least a little bit. One complaint that was voiced later on in a letters column was that the Chinese used was just nonsense or not even actual Chinese. I would hope that something like that would not happen if this story were presented today (it would be nice to even have it corrected when the Showcase comes out with this issue.)

Next Issue: Jonah ends up on a boat once again, and we all know how well that always works out.

UPCOMING THIS WEEK: Since it
A) Fits in the time frame of publications dates &
B) Chris Sims....I mean, Mike Sterling has been talking about Hex sooo much

I will also be covering Justice League of America #198 & 199, where Jonah Hex encounters the JLA on his terms. (good lord, I have a lot of scanning to do)
Posted by Dwayne "the canoe guy" at 6:00 AM

Did...did they keep Jonah drugged up for two whole weeks? SOMEbody's gonna be cranky when he wakes up!

I do have these, but I haven't read them in a very long time, so it is so nice to read them again.

And yeah, Mike (NOT Chris) had quite the Hexmarathon going on there!

"I will also be covering Justice League of America #198 & 199, where Jonah Hex encounters the JLA on his terms. (good lord, I have a lot of scanning to do)"

Great! I only have one of those, maybe, so I don't know how it ended. Is that the one where Enemy Ace, Jonah, and some others are yanked out of time to beat the hell out of the JLA/JSA? They all seem sort of bemused by the whole thing...

Actually those are 159 & 160 and you can find them in the right sidebar under JH Recap. I didn't do tons of scans, mostly just Jonah.

Dwayne! I haven't checked your site for so long...I'm sorry! Anyway, after reading your summary and scans of issue #59 I wanted to remark on the Chinese characters, they do make sense when you put them together.

In the scene where Jonah is lying on the floor of the hotel room, two men are speaking chinese, but if you link all the characters together it makes a sentence: "Wo Shi Mei Guo Ren." It translates exactly as: "I am American." That's what the chinese guys are saying. In the second picture at the docks, the Chinese men are repeating the same line without the last character, "Wo Shi Mei Guo" which this time translates to "I am America." The last missing character means person. I hope that sheds some light on the characters used, I'm surprised to see Chinese written in a Jonah Hex comic! But then again what's NOT in a Hex comic?? Oh and if somebody already explained this elsewhere...whatever, ya beat me to it! Being Mei Ling's son I'm fluent in Chinese.