Jonah Hex #60 May 1982
"The Domain of the Warlord!"
Michael Fleisher, story - Dick Ayers & Tony DeZuniga, art - Tony DeZuniga, cover
Jonah Hex awakens in a very small room that contains only a cot and a headache like no other. Not knowing where he is or how he got there, Jonah ha no plan for escape until he hears someone outside the door. He jumps onto the cot, feigning sleep and when the door opens, he trashes the Chinese man and runs down the hall. Hex's head is still groggy as the hallway appears to rock beneath his feet. He finds a ladder and drags himself up, openeing a hatch to discover...
He has been Shanghied aboard a Chinese sailing ship. The crew is just as startled and rush Hex, trying to subdue him. Jonah gives it his all, knocking one crewman overboard before he finally falls beneath the weight of his four attackers. The crewmen drag Jonah into the captain's quarters where he is confronted with Wu Bong Phat.
Phat tells Jonah that they are far out to sea and since Jonah killed one of the crewmen, Hex will be taking the crewman's place. If Jonah refuses, he will be killed.

"Days stretch into weeks, and the weeks, months as the Chinese trading ship plies its way slowly across the wide Pacific, then threads its way southward into the East China Sea.
"For Jonah, they are months of arduous physical labor, working alongside men he cannot even talk to. They are months of boredom and solitude... They are months of staring wistfully out at the great salt sea, longing to be home again." 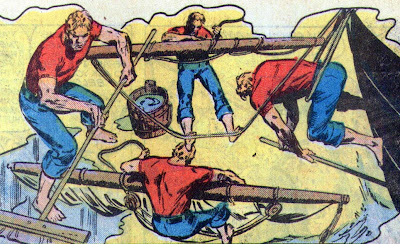 QUIZ TIME!!!!! How long has Jonah Hex been on this ship?
Then one evening, the lookout sees another ship approaching. Phat tells Jonah that it is a pirate ship and that he should get below deck. Jonah refuses, saying that whatever happens, he will have a hand in it. Just then the pirate ship fires and a cannonball drops the main mast of Jonah's ship. This, in turn, causes a fire (?!?!?!) and while Jonah takes note that the last military conflict he took part in was one in which he was on the losing side, another cannonball slams into the ship, knocking Jonah overboard.

Jonah decides that swimming is better that drowning on a burning ship and takes off swimming into the approaching darkness.

For one whole night, Jonah floats in the sea and when dawn breaks, he finds himself near a beach. He barely makes it to land before passing out from exhaustion. Some time passes and a Chinese couple find Jonah and take him back to their home. In bed, Jonah is suffering from delusions, screaming out that he will save Mei Ling. For nearly a week, Jonah fights the feveer as the Chinese couple nurse him back to health. 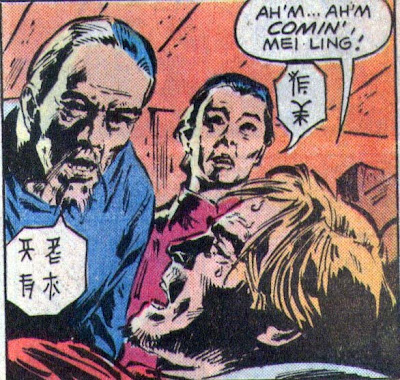 Three weeks after that (four weeks since landfall), a Chinese soldier bursts into the house and kills the homeowner. Jonah leaps up and knocks the soldier into the street, administering a good old fashioned beatdown. However, the soldier's buddies are nearby and they subdue Jonah and take him into custody, riding off towards the mountains with Jonah in tow.

Hours later, the group of soldiers arrive at a large mountain castle and push Jonah into a room where he encounters...

Wu Bong Phat!!!!! Also in the room is Yan Hsi-Shen, priestly warlord of the secret society known as the White Lotus. Phat explains that he escaped the burning ship via lifeboat and that he shall interpret the wishes on Hsi-Shen.

Shen asks if Jonah Hex would be willing to perform a service for the White Lotus for which he will be paid a generous fee. Jonah tells Phat that he doesn't know how to say "Cram it!" in Chinese. Phat states that he had foreseen that Jonah may be disagreeable, therefore he took the liberty of following certain steps to insure that Jonah would reconsider the proposal.

At Phat's direction a curtain parts and a large Chinese guard drags in .... 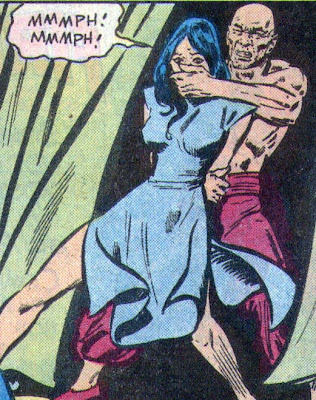 Statistics for this Issue
Men Killed by Jonah - 1
Running Total - 351
Jonah's Injuries - Shipwreck Fever & knocked out.
Timeline - This obviously takes place in the ongoing continuity (1875? 1874? 1878?) but more importantly is the passage of time. Let's say that he was on the ship for two months (taking the plural at it's lowest value) and add 4 weeks in the home of the Chinese couple and you have about 3 months! Last issue, we saw Jonah being kidnapped over a span of 3 weeks and being taken through the Nevada mountains to San Francisco. I would think that for the mountain passes to be clear we would be talking end of April/first of May for the kidnapping. Add 3 3/4 months and we are now in middle of August/first of September timeframe on this. Whatever year we're in, it is running out fast!! UPDATE: 05/5/09 I settled on 1876.

This story was a great read, taking Jonah completely out of his element and showing that he can cope with whatever comes up. Of course, God keeps Jonah alive (in Hex's viewpoint, merely to play with Hex some more and make his life pure hell) through some of it. Nowadays folks just don't know what a wide range plots Jonah Hex covered, they think it was all gunfights and hangings and have no idea about the trip to Brazil or China (both of them accomplished outside of the will of Hex). Anyway, this one keeps rollicking along for several more issues, so don't miss a one of them.

Next Issue: "Who let the cats out?" (whoot whoot) or "Harem-Scare-em!" (I miss Rocky & Bullwinkle)

Ahhh...I have this one, and the subsequent issues, and I do have to admit that it's pretty darned good. It's always nice to take the hero out of his comfort zone and shake things up a little

It WOULD be handy to know how to say "cram it" in a Chinese dialect.

You could say "Zou Kai!" which basically means "Get Lost!" "Cram it" doesn't translate cleanly to chinese. :P

I wanted to mention the Chinese in the scan above is just characters made to look like Chinese characters. Close to the real thing, but meaningless. Maybe the artist changed a few strokes on purpose knowing that Americans can't speak/read/write Chinese? I really wonder where they got the inspiration for the Chinese used in these comics.

Good call on the Chinese! This was addressed in a following lettercol and I'll post the editor's response soon.