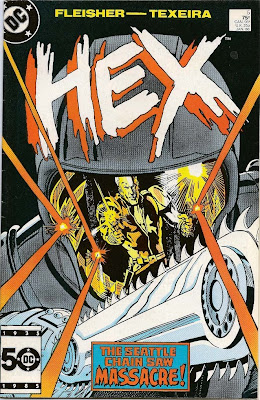 The three Conglomerate hoods land their hovo in front of the cave that Jonah and Stiletta have just emerged from. Once they exit the hovo, Jonah throws a knife at one of them and gets a quick introduction to body armor. Stiletta, however, ends up kicking on of the thugs in and unarmored organ, Jonah takes the cue and decks the one guarding him. Jonah and Stiletta quickly get the third thug out of the hovo and leave all three of them as they take off for parts unknown.

Meanwhile in 2042, Borsten is back in the top secret facility that he used to work in and he is sneaking down the microbial agent wing, hoping to obtain something that will allow him to overthrow the Conglomerate and rule the future. He enters a room but is stopped by another scientist who demands to see his credentials. Borsten creds only allow him into chronal studies and the scientist attempts to stop Borsten. Borsten pulls a pistol and demands a small beaker from the room.

The scientists are confused because he is asking for a totally harmless, though highly specialized, microbe. Suddenly Borsten has a seizure and realizes that he will die unless he gets back to the future and the Needle. He presses a button on his watch and returns to the future.

Speaking of which, back in the Needle in 2050, one of Borsten's scientists is getting ready for the boss's return and pulls up a file that he knows Borsten will want to see when he gets back. There is a sudden flash in the lab and Borsten returns and collapses to the floor. The scientist rushes to Borsten's aid and quickly drags him down the hall to the rejuvenation bubble. This leaves one lone technician in the room and he quickly pulls out a floppy disk, inserts it into the main computer and copies the secret file for the Conglomerate. 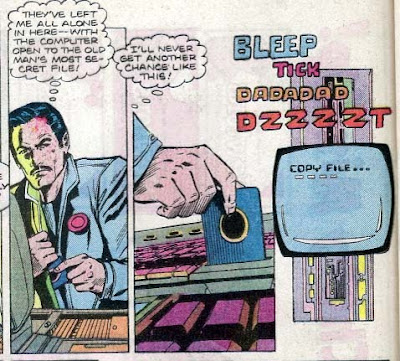 Meanwhile, Stiletta and Hex make a landing near a diner to grab some grub. Stiletta finds Hex's irons in the back of the hovo, guessing that the Conglomerate goons had abushed the hill scum to find out which direction she and Hex had gone. At the diner, Stiletta is amazed to find that diner for two will cost forty soames but Jonah politely persuades the owner (by placing his six-gun into the owner's mouth) that they are allowed to have a huge discount.

During dinner, Stiletta says that she and Hex should team-up since they are both survivors. Jonah replies that all he wants to do is get back home so Stiletta says that she can help Hex crash the Needle, but first they'll have to get some big equipment and to do THAT, they'll need to lay their hands on some soames, a LOT of soames.

Elsewhere, in a home owned by the Conglomerate, two of its members are looking at a photo taken from Barnaby Blossom's hovo, showing Blossom falling through the sun roof and Jonah in the hovo. They recognize Hex as the gunfighter that Borsten was supposed to have at a show and they draw the conclusion that Jonah Hex is working for Borsten by hijacking the Conglomerates lotus drug shipments. They decide to put an end to all of this foolishness by calling in a guy referred to as "Chain"

We cut to an desolate alleyway where a young scrawny nerdy looking guy carrying a bag of groceries  is in immediate danger of getting mugged by a gang of goons. The kid takes off running and manages to get into a small shack, all the while screaming for his big brother, Gowan. The goons run up to the door and easily kick it in and storm into the dark shack. The young kid can be heard sobbing and another voice rises up in the darkness, telling Marty (the kid) that he doesn't have to be afraid. We suddenly see one of the goons through clear through a wall, we hear another goon begging for mercy followed by a loud cracking sound and the other two goons make it out the door, running like hell.

A television screen lights up the shack as we see a member of the Conglomerate ask to talk to Chain. Chain (aka Gowan) drops a dead goon to the floor and takes the call. The Conglomerate says they need him immediately but Chain replies that he can be there in an hour, right after he makes Marty some hot chocolate and tucks him safely into bed.

Later that night we find Jonah Hex and Stiletta on a cliff edge overlooking a Conglomerate sub-treasury compound (aka soames storehouse). They are surveying the compound with high powered binoculars and Stiletta aks Jonah if he has any ideas on how to get in. Jonah replies "Yup."

Later, at a guard tower in the compound a hovo suddenly swoops from the sky towards the guards. They react instantly, shooting it from the sky and it crashes into the compound in a huge explosion. This throws the compound into red alert and they start evacuating the armored cars (soames wagons). One of the drivers jumps into his truck only to find Jonah Hex inside pointing a pistol at his head.

Jonah and Stiletta end up hijacking the truck and breaking away from the convoy that is headed to safety. Meanwhile, Chain, in his own hovo, picks up the radio chatter about the runaway truck and realizes that Jonah Hex is behind the theft.

In the truck, Stiletta is driving, and Jonah says he sure hopes they get away with this. Just then there is a huge THUD on the roof when Chain lands on the truck. Suddenly there is a rending of metal as a chainsaw cuts down through the roof. Jonah grabs his pistol and pumps a couple of slugs into Chain with no effect. Stiletta exclaims that he must have titanium body armor and as Chain takes another swipe through the truck cab, she cuts the wheel hard to the left and throws the killer off.

Chain, however is equipped with boot jets and doesn't splat on the ground. Sadly, Stiletta looses control of the truck and smashes into a hovo repair/junk yard. They both jump out of the wrecked truck as Chain smashes through it in pursuit. Stiletta is hit in the head with flying debris and falls to the ground. Jonah fires a few more times at Chain and then picks up a huge chunk of pipe, which Chain easily cuts through.

Jonah decides to hotfoot it out of there until he can hatch a better plan. This leads to a game of cat and mouse in the junkyard until Jonah is able to topple a huge stack of wrecked hovos on top of Chain. To Jonah's dismay, Chain is able to cut his way out of the mess. 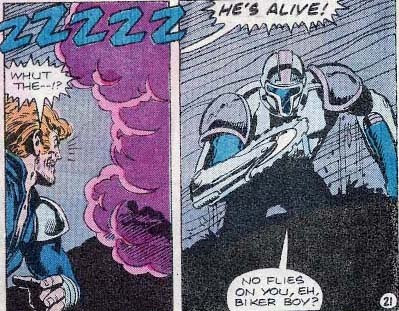 . Jonah resorts to his fists, sadly to no effect, and Chain calmly picks Jonah up and starts choking the life from him. Stiletta has regained consciousness and shouts for Jonah to hit the button on the machine next to him. Jonah lashes out and hits the button, turning on the electro magnet/compactor. This picks Chain up, drops him into the compactor and smashes him. Chain barely survives but is out of the fight. 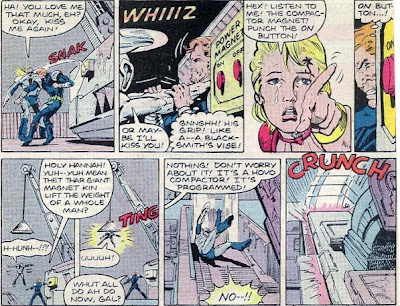 Jonah picks up Stiletta and they start to leave, only to find themselves completely surrounded by the Conglomerate!!


Statistics for this Issue
Men killed by Jonah - 0
Running total - 447 (428 past, 19 future)
Jonah's Injuries - None
Timeline - Same day as last issue, but we have progressed into that night.

Overall not a bad issue. One thing I do want to cover is the character of Chain. We meet his younger brother (Marty) and then we meet Chain (aka Gowan) . However, we never see the two of them together. When I read this book back in the 80's I always had this feeling that Gowan and Marty were the same person, kinda like Norman Bates and his mom. Why? I don't know unless it was we heard Marty's voice coming from a dark room right before Chain appears. (I might have to ask Mr. Fleisher about this.)

We get more mystery with the Conglomerate, more of Borsten's plans are revealed, Stiletta is getting a little sweet on Jonah. This issue moves the story along nicely, introduces a new character or two and gives us some action to boot. Thumbs up for this one.

Next Issue: Harris breaks out, the creation of soames, the origin of Stiletta, and Jonah rides the rollercoaster!
Posted by Dwayne "the canoe guy" at 12:01 PM