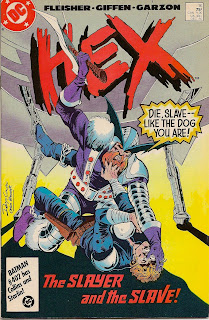 Jonah has been captured and is now part of the slave labor in the camp that belongs to the Visitor From the Future. Having had enough, Jonah grabs a rock and attempts to bash in the head of one of the guards. But this only gets him pummeled by half a dozen guards. 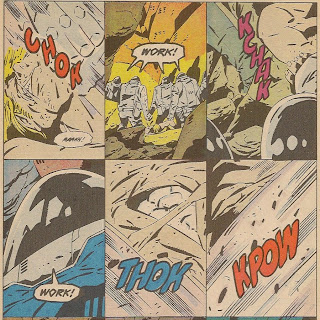 Meanwhile, Stiletta has visited a doctor to learn the reason behind her sudden attacks. He tells her that her symptoms indicate that the mind control drugs are very slowly working their way out of her system. However, he has also located a 'booster' cell implanted in her and that accounts for her great strength and speed. He says that he can remove it but just then three thugs bust in and demand drugs from the doctor. Stiletta jumps into action, crushing one thug with a roof beam (I think, I'm not sure), she throws a knife completely through the second thug and it appears that she snaps the third thug in half. Stiletta decides to keep the implant. 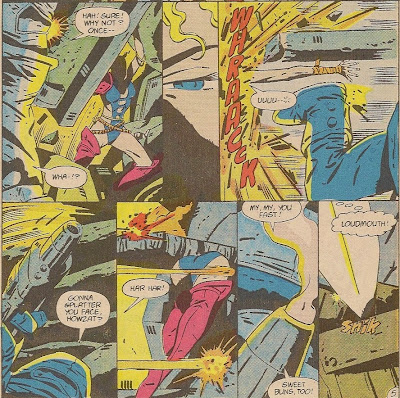 Jonah is now being held in a cell, but he reveals that during the beating, he manages to lift an electronic key off one of the guards. He figures out how to work it and manages to unlock all of the cells in the compound. So there is a huge jailbreak and during the confusion, Jonah decides to not run with the crowd and hides in a drainage pipe until all the commotion dies down.

Meanwhile, in the far far far flung future, the Xxggs have figured out that the Visitor From the Future has escaped their clutches and is now in the past (yet still, our future). They dispatch a liquidation team to hunt down S'ven Tarah (so THAT'S his name!).

Back to Jonah Hex. He is still hiding in the drain pipe when a guard comes by and Jonah jumps out and tries to clean the guard's clock. Jonah and the guard battles it out with Jonah winning .

Stiletta? She has left the mining town and headed toward the slave camp in an attempt to locate Jonah. Once she sneaks in, she has one of her attacks and with her super strength, beats the ever-loving snot out of the guards. However, this raises an alarm and several hundred guards are dispatched to the area. Oddly enough, one of the guards has a terrible scar. 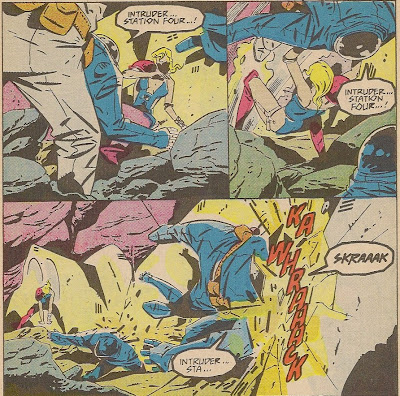 Appears that Jonah has donned the suit of the guard to beat up and he now is wandering the compound and comes across the giant starship that S'ven Tarah is building. Sadly, he also comes across the Starkad, the Viking from the Dogs of War. They fight, fight, fight, with Jonah taking most of the damage until Jonah douses him with gasoline and threatens him with a flamethrower (holy, Jonah Hex movie tie-in!!) 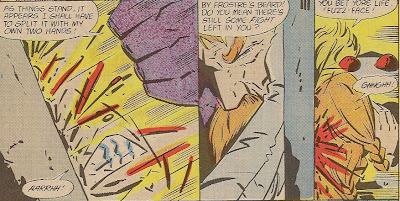 Suddenly Stanley Harris appears and sets everything right, introducing everyone all around.

Meanwhile, someplace in the darkness we see what appears to be a vehicle driving down the road. An alien looking arm appears, people scream, confusion reigns and we head for the next issue. 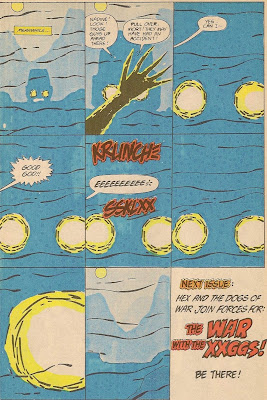 While there was plenty of action, this issue is like watching Raiders of the Lost Ark with my glasses off. Sounds like a lot happening, but I can't see a damn thing. Two issues to go!!

Next Issue: Fighting! Explosions! Tears! Anti-Climax!
Posted by Dwayne "the canoe guy" at 6:00 AM

This is worse than I remembered it to be. Yikes, I'll never complain about Tallulah Black again.

If only they had robot horses.

Woah, two issues in one week? You, sir, are a brave, masochistic man.