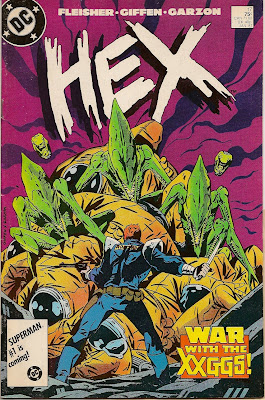 Oh. You want MORE detail than that? ooooooooooookay. Hang on, cuz here we go!

Jonah Hex, our scar-faced time-displaced bounty hunter is the topic of conversation between S'ven Tarah and Stanley Harris. S'ven is astonished at how much havoc Jonah was able to cause when suddenly the guard drones drag Stiletta into the room. Stiletta is surprised to see Harris since she thought he went back to the past right before the Needle explosion. She takes out the guard drones and then I have no idea what happens. Don't believe me? YOU tell me what is going on in these three panels. 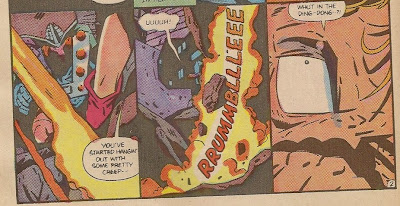 Meanwhile, three Xxggs are running loose through the compound, searching for S'ven Tarah. They also have these floating sidekicks (ala Skeet) by they appear to be organic and shoot and horrific power blast, at least that what I THINK is happening in these three panels. 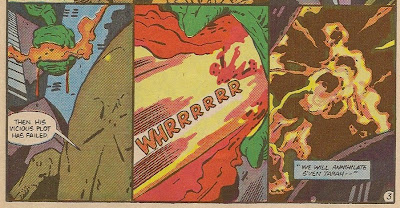 Currently S'ven Tarah has realized that the Xxggs are in the compound and he has 30 minutes before he can launch his spaceship that will signal the future destruction of the Xxggs race. The Dogs of War offer to battle the Xxggs but S'ven reminds them that five of them are required to properly man the spaceship if its mission is to be successful. If even one of the Dogs of War perish, Earth (in the future) is doomed. S'ven decides to dispatch his guard drones to slow down the Xxggs to buy time until liftoff. The Dogs of War, along with Jonah Hex and Stiletta, take off for the spaceship.

During the quick race across the compound, Jonah asks if anyone can bring him up to speed. Harris explains S'ven's plan to alter the genetic makeup of the Xxggs race in this current time and the genetic weakness will snowball until the Xxggs can be defeated in the far flung future. Jonah replies that he is still in the dark on what is going on. 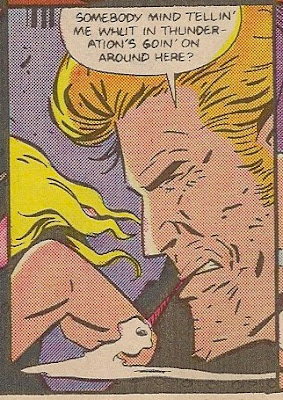 You and me both, Jonah, you and me both.
Across the compound, the Xxggs encounter the guard drone army and quickly dispatch the several hundred of them. S'ven, realizing that the Xxggs have not been slowed down enough does the only thing he can. He releases all of the prisoners, the criminals and the innocents that he enslaved, provides them with weapons and allows them to encounter the Xxggs. Thousands of slaves are released and when they encounter the aliens, they fight bravely, but are slaughtered en mass.

With time running out and the Xxggs having the run of the compound, S'ven orders the Dogs of War to fight the Xxggs to prevent the destruction of the spaceship, however, none of them may fall in combat. The Dogs of War embark from the skycraft that are using to get across the compound (when did they get into THAT?!?!?) leaving Jonah and Stiletta to their own devices. Jonah roots around the ship and finds a jacket that somewhat fits.

The Centurion encounters the first Xxgg and it's sidekick and blasts it with enough energy to "level half of Rome" but the aliens are unfazed and the Centurion has to retreat.

Harris encounters a Xxgg next and using his chronal aging powers quickly ages a huge wall, causing it to collapse on the Xxgg, but the alien is able to blast its way free and Harris beats a hasty retreat.

The Ninja is next up and with the swiftness of his blade is able to slice one of the sidekicks in half but there is some sort of explosion and a wall collapses and falls on him, crushing him. One of the sidekicks is laughing a hideous laugh when a huge arm jets up from the rubble and squishes the sidekick. It is the Demon that lives within the ninja. The demon states that he is sworn to forever thwart the ninja's hope of an honorable death and then retreats back into the ninja. As the Ninja realizes what has happened, we here the Demon state "Effortlessly could I destroy all your enemies if I chose, little ninja, but give me one good reason why I should."

Then we see....wait one cotton picking minute. The Demon could kill all the aliens but won't? The demon is sworn to protect the Ninja from an honorable death? Then why the hell didn't the ninja head out and take on the aliens all by himself? That would be an honorable death and the demon would HAVE to protect him and destroy the aliens. I ain't no ninja and I could get that demon to do MY dirty work. Sheesh.

Anyway, then we see the viking running toward a Xxgg with his battleaxe, he smacks the ground with it, causing the rocks that the Xxgg is standing on to crumble but then he heads out for the spaceship.

Next is the flying Manta Ray who quickly realizes the Xxgg are immune to his paralyzing stare and he heads for the spaceship.

By now S'ven is resigned to his loss when suddenly Jonah Hex breaks in on the comlink and quickly outlines his plan. Its crazy, but just crazy enough to work. Stiletta drops Jonah off in front of the Xxggs and he takes off on foot and the aliens give chase. Jonah runs down a tunnel and turns a corner. The Xxggs come around the corner, see the tunnel and head in, just as Jonah steps from the shadows and activates the forcefield, sealing the Xxggs within the tunnel.

Much much too late the Xxggs realize that the tunnel they are in is actually the exhaust damper chamber for the spaceship and as it takes off they are fried to a crisp.

With the ship safely in space and all of the Dogs of War safely aboard, S'ven thanks Jonah and Stiletta for their help and explains that he must go back to his own time. If he does not, the Xxggs will send more search parties. S'ven will wipe his mind of all knowledge of what has happened, they will capture him and realize that he knows nothing. 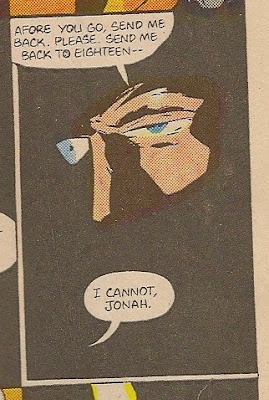 Jonah interrupts, saying that since S'ven has been talking about time travel could he send Jonah back home? S'ven states that the teleportation crystal that he has only has enough energy for one more trip. Jonah asks what will happen when S'ven returns. S'vwn replies that he will be mind-scanned and then executed...then he fades away.

Jonah and Stiletta are left among the smoking, burning ruins of the compound and Jonah looks upward. Stiletta asks "Well?" Jonah replies, "Nuthin. Just lookin that's all. Wondering if'n mebbe ah couldn't see 'em." and we are left to see a twinkling star that could be the spaceship that will save the Earth.

Well, like I said earlier, it's a lot of fighting and a little bit of sadness. Sadly, everything was out of character with Jonah being the one to figure out to lure the Xxggs into the damper chamber but he is the hero of the book. It's just that Jonah can hold his own against humans in the future, but you start throwing in super powers and alien races, and that stretches even MY willing suspension of disbelief.

Giffen's artwork is still a major downfall of this book and there are times that I realize that if this book is ever printed in black and white there is no way in HELL anyone could know what is going on. Personally, I think that he should be charged with fraud for posing as an artist. Does anyone know if Giffen got some sort of kickback from a black ink company? I have NEVER seen an 'artist' use so much of the stuff.

Next Issue: Jonah has one last shootout and makes a horrific discovery.
Posted by Dwayne "the canoe guy" at 10:33 PM

Good Lord. This was my main beef with the "Road Warrior" Jonah Hex phase: in the original series the editors made a big deal out of realism and never relying on flying men in tight suits and capes to solve anything. They gave up on that with the very first Hex, first with hover crafts and physics defying gadgets, and finally in the reign of Giffen, with flying idiots and super aliens...if indeed that is what is going on...it's so freaking hard to tell. I have a copy of Hex 18, and if I ever want to simulate a fever dream or really bad acid trip I read it.

Again Dwayne- thanks for taking one for team.

Does anyone know if Giffen got some sort of kickback from a black ink company? I have NEVER seen an 'artist' use so much of the stuff.

The picture where Jonah says "Whut in thuderation..." looks like it's out of a Milton Caniff (Terry and the Pirates; Steve Canyon) strip. Caniff was known for his use of shadow and inks.